What is the best strategy to reduce COVID-19 outbreaks in school?

As Canadian public schools open up again this fall in the midst of the ongoing coronavirus pandemic, things will be very different. Each province is bringing in its own rules and guidelines, and many jurisdictions are mandating that older students wear masks all day.

Others are using additional measures to minimize the chance of students contracting COVID-19. The country’s largest school board, the Toronto District School Board, is implementing a rotation system for high school students. They will go to school on alternating days, with half of the class on one day and the other half on the next. The aim is to keep each group at 15 students per class. The teachers will be the same and they will repeat the lessons to each group.

What will such rotation do to reduce contagion risk?

Because we don’t have much in the way of experience with these measures for COVID-19, predicting what might happen requires some mathematics. Fortunately, that task has been done in a new study by economists Jeff Ely, Andrea Galeotti and Jakub Steiner. And what they find could give many places guidance as to how to use rotation as a tool to mitigate contagion.

That study found there are potential benefits of having two separate groups of people who regularly interact with one another, but don’t come into contact with anyone outside of their group. If one person becomes infected and the virus spreads, it will be contained to a single group.

The study also showed the effectiveness of different rotation strategies depends on how much and how quickly school officials deal with potential infections. If they wait too long, it’s likely all of the groups will become infected. In that case, rotation isn’t effective in terms of reducing the scale of infections. If schools react quickly, however, one group could be isolated while the other group could keep going.

A video produced by the Toronto District School Board explains the guidelines for students returning to school.

But there are some interesting other choices too. First, there is the issue of cadence. Is it better to have different groups on alternating days or a longer period — such as alternating weeks? And what about the teachers and staff who come into contact with both groups? Might that be enough to remove the benefits of group separation and rotation entirely?

With COVID-19, we know that many people — especially younger people — tend to be asymptomatic. That means it may be weeks before officials discover an outbreak. Add to that the time needed to have students tested for the virus and it’s plausible that it could take as long as 30 days for a school to notice and react to a potential outbreak in a group.

Now let’s consider a school with 500 students. Even with class rotations, students share common bathrooms and hallways. Without measures like social distancing, COVID-19 has a basic reproduction rate of about 2.2 to 2.5 — that is, every infected person is likely to infect two or so others if there aren’t any interventions going on.

That means that once one person is infected, the number of infected people will double every five days or so (since this is how long it takes for an infected person to start infecting others). Wait 30 days before dealing with the problem (by a lockdown or mass testing) and you would have 16 people infected — that is, two to the power of four, where four is the number of doubling cycles in 30 days if you subtract eight days for weekends. 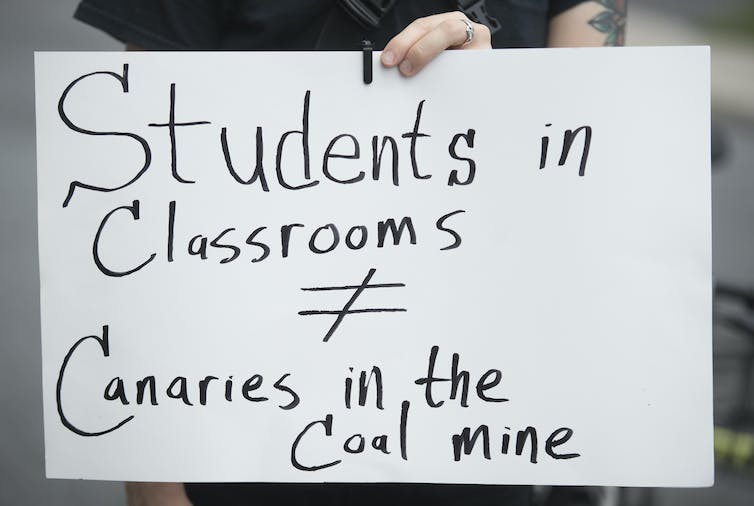 People take part in a rally in front of the Montréal offices of the Québec Minister of Education to express their concerns with the back-to-school plan by the government of Quebec. THE CANADIAN PRESS/Graham Hughes

Option 1 (One half at school and one half at home): Suppose we took half of the students and asked them to learn remotely, with the other half attending class in person. The isolated students would be safe, but the other students would likely become infected at some point. In this case, we potentially get fewer infections. Specifically, if prevalence is low in the general population, the chances that the “seed” or “Student 0” infection is in the group at school is half what it would be if both groups attend class in person. Thus, the total expected number of infections is 8.5 — ((1 + 16)/2).

Option 2 (One day on and one day off): Suppose we rotated the students in two groups of alternating days. In this case, chance will determine what happens and that is in our favour. There are 11 days of a month where a group with an infected student exposes others to contagion, so the total number of infections over those two maximum doubling cycles is four (or two to the power of two).

So Option 2 is clearly better. With two separate groups, over the course of a month, students in one infected group are exposed to others half of the time (or 11 school days over a month). If we had one week on and one week off, the same outcome would arise.

What about the teachers?

In any rotation plan, the students spend time at school and then time at home. But the teachers are there all the time. What does that do to these calculations, given that teachers are mixing with both groups?

Rotation forces regular breaks in exposure, which is valuable when there aren’t other ways of preventing exposure. Rotation also reduces viral spread (that is, the reproduction number) because it forces a reduction in population density in a place. Again, it is precisely because these other interventions can reduce viral spread that they are substitute options to rotation.

Thus, while it is tempting to take a “kitchen sink” approach and take every intervention at your disposal, those interventions have costs. Masks must be procured and worn. COVID-19 tests require infrastructure. Finally, rotations mean kids spend more time at home, which has its own costs above the potential education costs.

Instead, there is a good case to be made that the optimal strategy is to either rely on rotation to reduce exposure risk or to invest in other interventions like mask-wearing and testing. Doing all of them may give fewer benefits relative to cost.